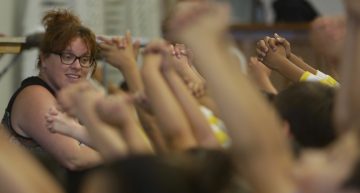 Alison graduated Magna Cum Laude with a B.F.A. in Musical Theatre from Boston’s Emerson College. In addition to performing and choreographing at the college, she produced such productions as Company, Fame, and Wonderful Town.  She is featured in “Who’s Who Among Students in American Colleges and Universities.”  After living in New York for a few years, Alison went back to school and received her M.F.A. in Musical Theatre from San Diego State University, one of only two such programs in the country, where she graduated with honors.  Her studies at SDSU also took her abroad, where she briefly studied at the Artisten School of Theatre, Opera, and Musical Theatre at Gothenberg University in Sweden.

As a performer, some of Alison’s favorite roles have been “Fricka/Erda/Needa” in Das Barbecu at San Diego’s Theatre in Old Town, “Mary Flynn” in Merrily We Roll Along, “Celeste” in Sondheim’s Saturday Night, “Lisa the Homeless Lady” in A New Brain, “Miss Hannigan” in Annie, “Rizzo” in Grease, “The Old Lady” in Candide, “Mazeppa” in Gypsy, “Cassie” in A Chorus Line, “Young Sophie” in Sophie: The Red Hot Mama at the Kravis Center for Performing Arts in Florida, and the “Narrator” in Joseph and the Amazing Technicolor Dreamcoat in New Zealand.

In addition to performing, Alison was also an assistant agent at a leading New York talent agency.  She has choreographed A New Brain, Honk! (KPBS Patté Award winning production), Bat Boy, The Musical, A Man of No Importance, Zombie Prom, and In the Beginning (all for SDSU’s M.F.A. Musical Theatre program), in addition to Leading Ladies and No Way to Treat a Lady (North Coast Repertory Theatre), Camp Wattabunchaphun (a children’s musical film), and online educational projects for ABC Mouse/Age of Learning.  Alison also directed A…My Name Will Always Be Alice (The Coronado Playhouse) and assistant directed Too Old for the Chorus (Theatre in Old Town) and Baby (North Coast Repertory Theatre).  Additional choreography credits include productions of The Boys from Syracuse, Little Shop of Horrors, Once on this Island, A Chorus Line, and numerous revues. She was the assistant choreographer for productions of Gypsy and Fame at Emerson College, The Root Beer Bandits at the Falcon Theatre, and Tarnish, a new rock musical that premiered at the New York International Fringe Festival.

For five years Alison was also the Co-Lead Teacher at Emerson College’s Musical Theatre Pre-College Summer Studio Program for high school juniors and seniors.  There she developed and implemented a new curriculum for the summer intensive that attracted talented and competitive high school students from all over the world.  She has also taught acting at Grossmont College and San Diego State University, various musical theatre master classes throughout Southern California (favorites being at the Los Angeles County High School for the Arts, Chime Charter School, and the Drama Teachers Association of Southern California Festival), musical theatre dance styles at SDSU’s M.F.A. program, as well as private coaching and college counseling for those interested in pursuing a career in the performing arts.  In recent years, Alison traveled back to Moscow to visit the Slavic-Anglo-American “Marina” School.  While there she spent a week teaching a series of theatre workshops to students ranging from 1st to 11th grade.  She was also a guest judge and master class teacher at the 10th Annual Shakespeare Festival, where thirty-six schools from all over Russia and Latvia competed.

Alison hopes to continue working on, and eventually publish, her thesis, Musical Theatre Dance Styles:  Combining Scholarly and Practical Pedagogy.  A proud member of Actors Equity Association, Americans for the Arts, the Association for Theatre in Higher Education, the National Dance Education Organization, the Educational Theatre Association, the American Alliance for Theatre and Education, and Phi Kappa Phi (an international honors society), Alison is also a recipient of the Marion Ross Teaching Fellowship and the Carol Burnett Award for Performing Arts.
Alison is incredibly passionate about arts education and helping young people realize their fullest potential, both onstage and off.  She is thrilled and honored to carry on Mr. Urban’s legacy as MET2’s Artistic Director.