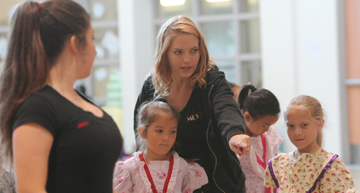 Hannah Bourasa has been with MET2 for over fifteen years. She started performing in kindergarten and grew up in the company as a cast member and student over several years. Once she got to high school, she joined the Student Teaching Volunteer Program. Eventually, she was offered a permanent position as Staff Director. Hannah has won National Youth Arts Awards as Outstanding Featured Actress for her performance as “Zanetta” in The Music Man and Outstanding Supporting Actress as “Miss Hannigan” in Annie.

Along with theatre, Hannah spent many years participating in cheerleading. She started off in Pop Warner, going on to win the 2010 JAMZ nationals with her team, the Marauders. She then proceeded to serve as captain of the freshman cheer squad during high school. Hannah spent the next three years on the varsity cheer squad at Mount Carmel High School, eventually becoming captain during her senior year. After graduation, Hannah went on to join the Palomar College Cheer Team, who placed first at USA Nationals in Anaheim, CA and sixth at the NCA Nationals in Daytona, FL. Hannah hopes to one day become a cheer coach for a school or a professional cheer company, such as JAMZ or NCA.

Hannah loves working under stressful and fast paced circumstances, so she thought the field of paramedicine would be a perfect fit for her. Hannah recently completed the EMT Program at Palomar College. She hopes to secure a job as an EMT and then go on to be a paramedic and firefighter. Hannah is then hoping to have a career as a nurse in the ER or Burn Unit.