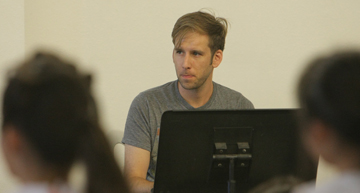 Jeremy Robinson is a pianist, guitarist, composer, and music producer in Los Angeles. Jeremy has been playing the piano since the age of six and has traveled the world performing in various groups from orchestras to rock bands. He received his B.A. in music with an emphasis in piano performance from Columbia Union College in Washington, DC and is currently earning the Film Scoring Certificate at UCLA Extension.

As a music director, Jeremy has played for many theatrical productions including My Fair Lady, Grease, All Shook Up, My Way (A Musical Tribute to Frank Sinatra), Damn Yankees, Shout! The Mod Musical, Charlie and the Chocolate Factory, Bye Bye Birdie, and Seussical. When not at the theater, he can be found in the studio composing and producing music for various artists and songwriters.

Jeremy is thrilled to be a part of the MET2 team as Musical Director and is eager to share his knowledge and love of music for many shows to come!