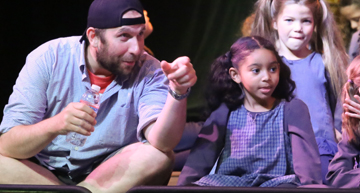 As an actor, Seth played the “Bishop” and “Thenardier” in the national tour of Les Misérables.  Seth also traveled to China and Korea where he performed in the show’s premiere productions with the original “Jean Valjean,” Colm Wilkinson.

He was in the original cast of the Off-Broadway musical Summer, with Tony Award Winner Laura Benanti. Over the years, he has performed with Tony Award winners Sutton Foster, Jason Alexander, and Karen Olivo. Other credits include “Mendel” in Falsettos, “Smudge” in Forever Plaid, and “John” in john and jen. Seth holds a BFA in Musical Theater from the Cincinnati Conservatory of Music.